During my training, we discussed main principles of prepared Montessori environment. I want to discuss and share them with you. Nice shelves and beautiful materials are important (spoiler! We will talk about it later) but the theory is an integral part of Montessori education. To my mind, in the beginning, you need to understand the main idea that you need to follow. Thereafter it will be extremely easy for you to create a Montessori activity. You will be able to build suitable learning environment at home or in the classroom because you will know the core. I treat Montessori as a way of living and with this view on life you look at everything through a Montessori window. 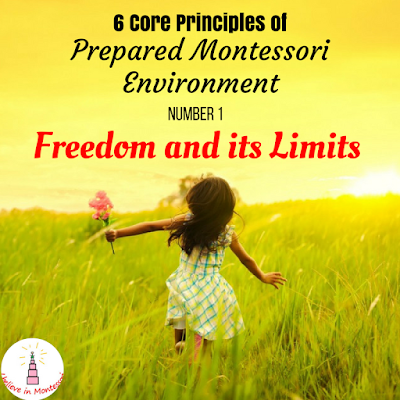 In the next 6 posts, we will discuss main ideas that will help you to see the whole picture and understand Montessori philosophy better.

So, number 1. Freedom and its limits
This may be difficult to understand at first for people who just discovered Montessori for themselves. How can you give a child complete freedom? That means that he would do whatever he wants? Should you prohibit nothing? Should you allow everything?
But to start, what is freedom?
For me, freedom is our naturally developed ability to choose best for yourself and others. We give the child this ability. We try to create the best environment for him and let him act in it freely.
Giving freedom doesn’t mean there are no rules. A lot depends exactly on setting strict rules from the beginning. When a child comes in my classroom for the first time I introduce him to the rules and I don’t change them. I always keep them. Thus, he can do whatever he wants but in this limit of rules.
Imagine a situation, if I haven’t introduced him rules from the start and he is running in the class. Next day I would tell him that we don’t run in the class. Hence, how should I explain to him that yesterday it was allowed because I was busy to say it to him and today he is not allowed to do it? I believe this is not right.
It is important to remember those rules are fair for everyone and you are the first to follow them too.
In Montessori classroom exists 3 main strict rules
You can not
– harm yourself
– harm others
– harm environment
Thereafter we add numerous rules corresponding to the way of behaving in Montessori classroom, rules connected with proper treating of Montessori materials and other.
From these aspects, one may conclude that Montessori classroom may even have more rules than any other but still children feel freedom in here. Though it can often look like everything is perfect and children behave so well, but it is a long process of adaptation and a lot of work from children’s side and teachers’ as well.
The SECRET of having freedom within the limits to my mind is in the way of presenting it to children. If they see all these rules from the beginning, they are not changing and everyone keeps them kids treat it as the way of life. It becomes extremely easy for little ones to follow them!!! Rules are not burdening for them. Kids just think that it should be in this way. They even don’t treat rules like rules, they treat it as the natural way of acting in Montessori classroom. I must say it always works for me. Always! 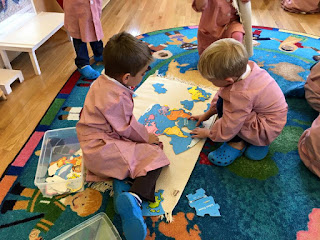 Children are working on geography puzzle together in Montessori Casa International

You can apply this knowledge at home with ease. Think about what is allowed and what is not acceptable to do at home, during the walk, at the shop. Introduce a child to these rules. Be the first to keep the guidelines.

Interesting that discussing freedom I write so much about forming limits. But this thing is extremely important to understand. This is the key to everything.

Montessori way of education is often referred as “preparing for life” and Montessori classroom often reminds me the structure of our community. You also have complete freedom, but there are some limits that you can not overcome, like you can not steal, you can not harm state property, you should not trash. In real life, you can not come to a person and just take his things away because you like them as well as it is also not obligatory for the Child to share his work. You have private space likewise a Child has a rug or workplace of his choice where he can feel himself comfortable. Maybe, it is another secret of Montessori education – making everything more real?
Let’s consider what kind of freedom do children exactly have in Montessori:

– Freedom to move. In our classes, children don’t need to sit calmly in one place. They can move around the room as much as they want. Many classrooms have movement area thus when a child wants he can stop working with activity, put it on the shelf and just go and climb some ladder. Some may think something like “My child is so active, he would never do activities if there were movement ladders. He would choose such kind of things.” Maybe, if the child has such need he will, but in my experience, after several days of choosing movement child then will work with materials. He will fulfill his need and then do some purposeful work.
Movement is especially important for infants and toddlers. You can not prohibit them to move. I met some families that visited not Montessori classes where children sit on parents’ laps around a big table and teacher shows them different things during about an hour. We don’t use this model of transmitting knowledge from  teacher to a child. We treasure knowledge that child discovered by himself. Movement is exploration so it is not prohibited.

– Freedom to choose. We prepared environment and materials and child chooses what he wants to do. He can work with some material, he can read a book, he can just observe something, he even can do nothing if he feels tired. And this is ok. 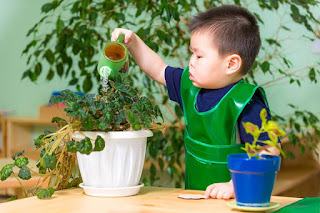 – Freedom to repeat.
“Repetition is the secret of perfection” – Maria Montessori, The Discovery of the Child

A child can repeat one exercise as many times as he wants until he feels confident. I observed a girl who took some puzzle to work. The material was quite difficult. She was forming it for a long time and then it was done. She looked at it and then disassembled it. The girl got it together once again, this time faster and deconstructed it again. Eventually, she got it done incredibly fast and put the work on the shelf. She never worked with it again. See, she was working with it until she mastered it and thereafter she felt that it was enough.

– Freedom of time. A child can work with one activity as long as he wants. Yes, it happens that a couple of Children wants to work with one material but such situations teach them to wait for their turn, to respect others.

– Freedom of communication. On the contrary to the general system of education, in Montessori classroom child can talk freely with his friends. They can work together and discuss some aspects of materials. They can work independently and discuss someone’s visit to grandmother. This way they improve their communication skills. They learn to talk in a way that it doesn’t interrupt others. They learn how to communicate politely.

– Right to make a mistake. I also treat it as a type of freedom. There is nothing bad in making mistakes. This is how we learn. I like observing child who works with some self-correcting Montessori material, like for example knobbed cylinders. If a child makes mistakes and puts some cylinder on the wrong place I don’t say it to him, I wait. In the end, he would not be able to get everything together if some piece is not in the proper place. I observe how Child finds his error and how he tries to solve it. Often, it can be a difficult process, I can literary see how Child’s mind and brain are working. It is hundred times better than correcting him. Correction makes it easier for him. But should we make it easier if he can do it in a difficult way? I don’t think so. Importantly we believe in our Child and let him try and try and try.

I found for you a couple of other articles about freedom in Montessori education that are very useful.

I hope you found something useful for you. Next time we will discuss next principle – Order and Structure.

20 thoughts on “6 Core Principles of Prepared Montessori Environment. Number 1. Freedom and its limits”