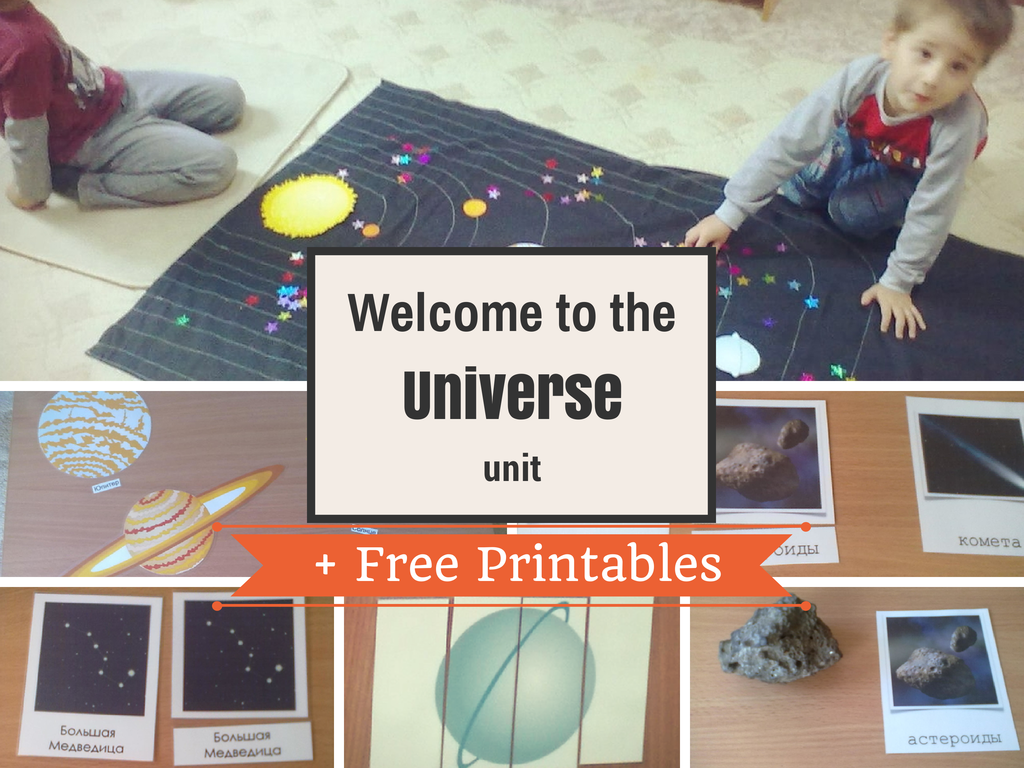 When I only started to work in my school the first thing we were studying was the Universe. I remember my preparation when I thought – “Well, I need to refresh my knowledge in Astronomy!”. My knowledge from the school was really blurry. I opened encyclopedia and started reading all about the Universe, the Solar System, planets…Сelestial Bodies were difficult for me. I needed to tell real information, because it is very important to give children real identification, but also this information should be understandable by kids. Probably this unit is one of my favourites because I like to look at children’s’ faces when they study it. They are surprised, amazed, enthusiastic. Also, I like discussing it with them. Oh, how many funny questions about it they are asking. Like, for example, about meteorite “Does it come back there after falling?”, “Does he save/help people?”.

Today I want to show you several materials that we use during the Universe study.

The very first lesson is an introduction. I tell children general information that we all live in a big Universe. I show them a couple of pictures. During this unit, I prefer using more natural pictures. Happy smiling planets are cute, but I don’t like using them.
The next material I present is called My Cosmic Address. And that is how it look like:

These are 8-10 cards with words. My cosmic address is The Universe-The Milky Way Galaxy-The Solar System-The Planet Earth-The Continent of Europe-Country Ukraine-Lugansk Region-My Street-My House (or can be my school). I love this material because it helps children understand their place in the Universe. It supports Montessori principle of learning from general to specific, from big to small. I made two copies of each card. You can stick together first set after laminating with the help of tape, for it to looks like a brochure, like this:

Or you can make transparent row of pockets, where you can put each card. I use it as example and control of error.
There are two ways of presenting this material.
1. This one I was using before. We were discussing with children what if aliens want to visit us and they do not know how to get here. We need to help them and tell our cosmic address, where we are situated.
2. This is the variant I am using now. Once I was browsing Waseca website and found their Cosmic Nesting Box. I thought it is very much alike my Cosmic Address material.  On their website, they have Cosmic Nesting Box Lesson. And I loved it. So I changed it to fit this material and now use it. So here it is…
~ Do you remember that we all live in the big Universe? (Show the Universe card) Now close your eyes and imagine yourself in deep dark space. The space is blacker then the blackest night and it goes on in all directions forever and ever.
Imagine that you are moving through this space and ahead you see light. As you get closer, you see that the light is coming from a cluster of millions of stars. The stars are clustered together in the shape of a spiral. This is the milky way galaxy .
Open your eyes now (show the Milky Way Galaxy card). There is one particular star in this galaxy and if you move closer to it, you will see that it is our sun with planets in orbit around it (show the Solar System card).
One of those planets is just the right distance away from the sun so that it does not get too hot or too cold
to support life. That planet is our earth (show the planet Earth card).
The earth has water and large areas of land called
continents. Our continent is called Europe (show the continent card).
Within Europe is a country called the Ukraine (show the country card).
One of the regions within this country is called Lugansk Region (show the region map).
Inside of this region is a city called Lugansk (show the city card).
Within your city or town is the street where your school is located (show the city card).
Inside of the building is you, a child. One of seven million people on this planet. An individual who is unique.~
I was thinking a lot about how to make this material into printables that will work for everyone. And in the end, I came out with the conclusion that it is impossible. So what I have made, I made 4 first cards that are suitable for all of us and then several different pages with one of the continents. I left the other cards blank for you to paste there your city, home, school photos and names if you want. So you need to print the first page and then choose a page with your continent. On the second page, I showed an example, how this material looks in my variant. For the continent and country cards I used pictures from Wikipedia. I used exactly them because using of these pictures makes the material to look like you zoom it from the universe. You can write the name of your country in Google and find the page in Wiki and  use this image. 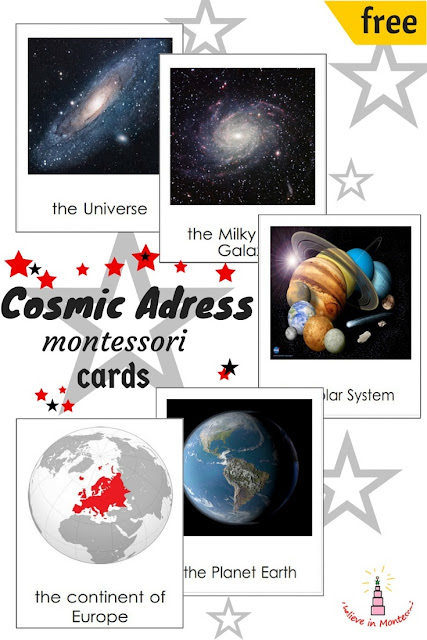 You can download this material  for FREE here: My cosmic address cards

Then I introduce kids to  the Solar System.  I made this material with sewed planet orbits. Children love it! 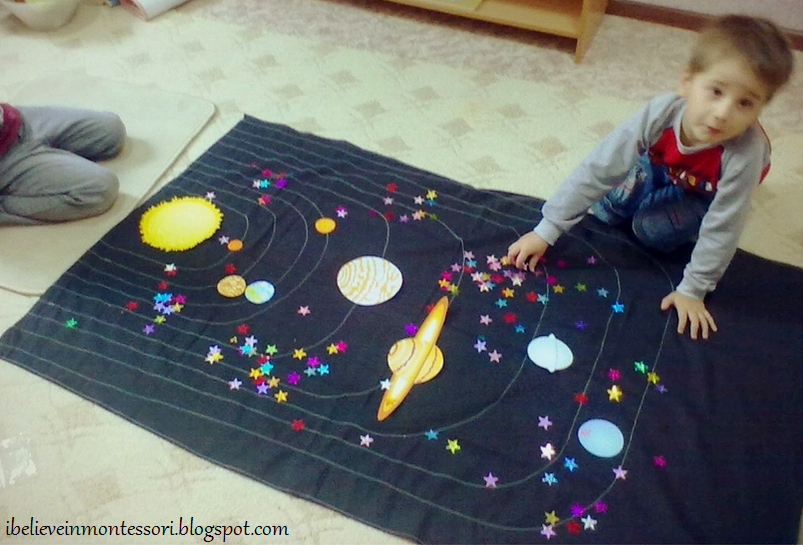 The other teacher bought this cloth for me and it was of this size. So I had to make the Sun be on the left side and we can see only the half of the Solar System. It would be perfect to place the Sun in the middle and orbits to go around it like you can see here. 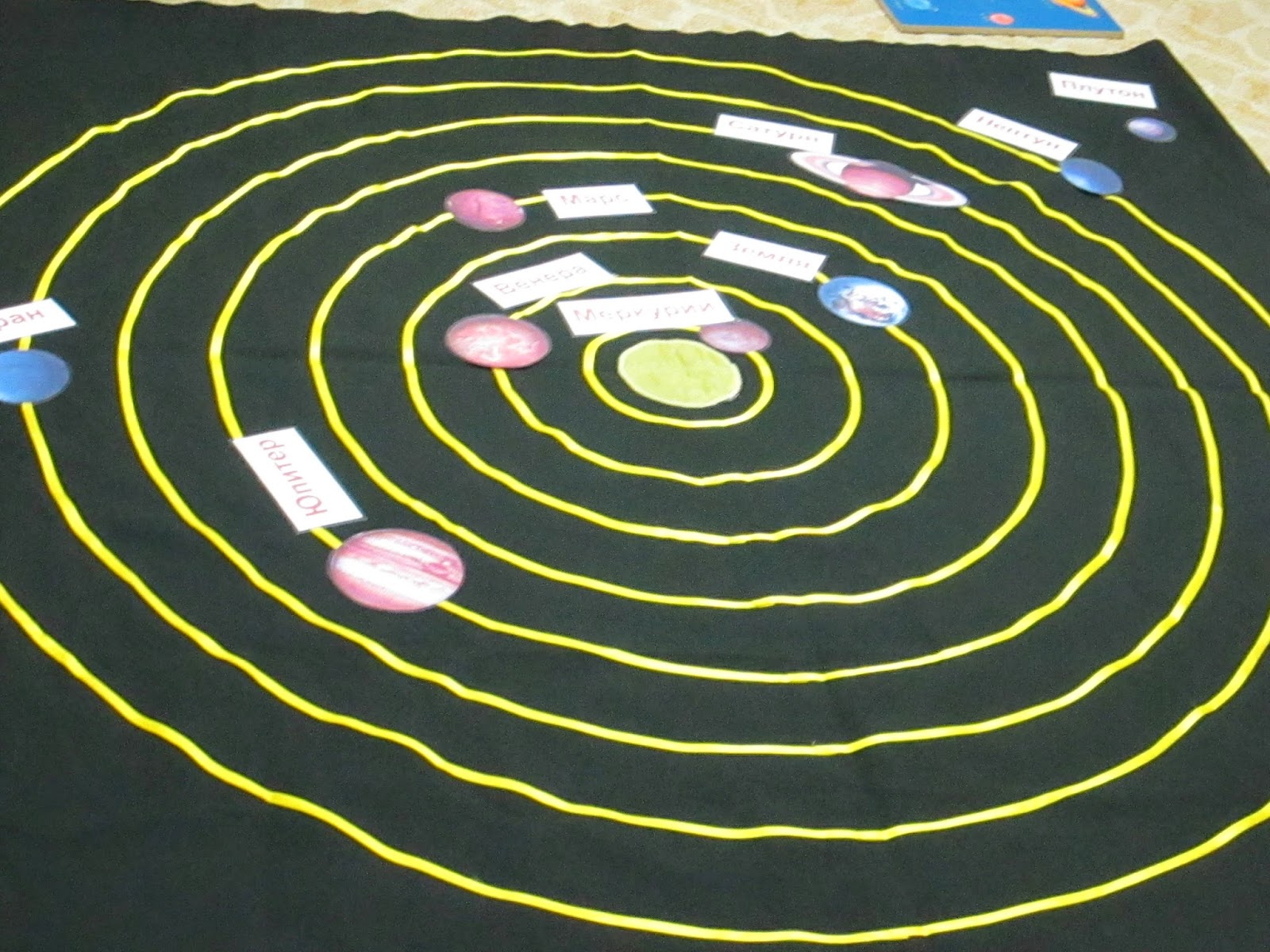 This material is from my friend. Here it is probably bought, but it is easy to DIY it. Just find the cloth of perfect size and sew the orbits.
So I printed the planets and laminated them (I am sorry to my shame I do not remember where I downloaded them. But they were found online for free. If you know where they are from please leave a comment) 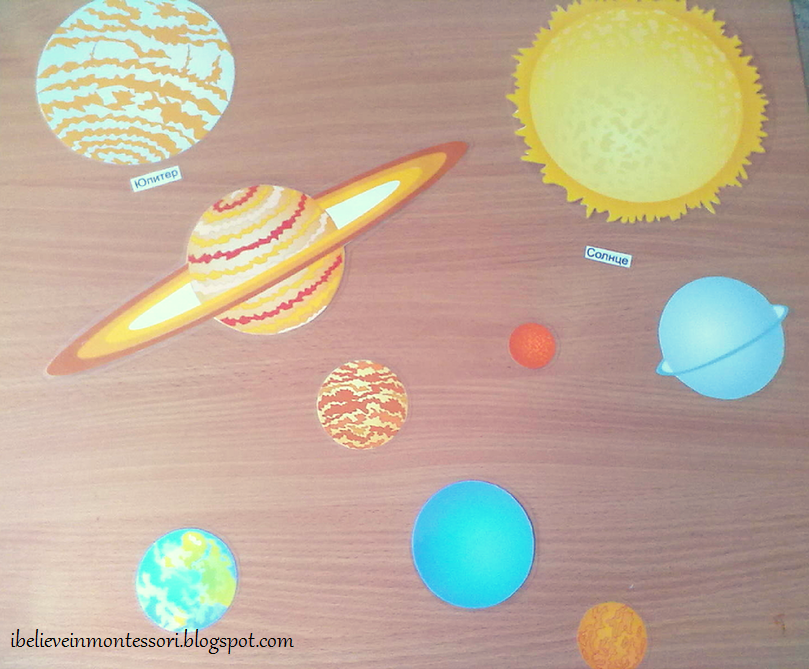 I advise to use natural looking pictures. Also, try to find the one that correspond in sizes at least a bit.
I start to tell children about the Sun and then tell about each planet and every time I show how every planet goes around the Sun. Children like to orbit too. Then I sprinkle a lot of stars and tell that in reality there are several times more of them. 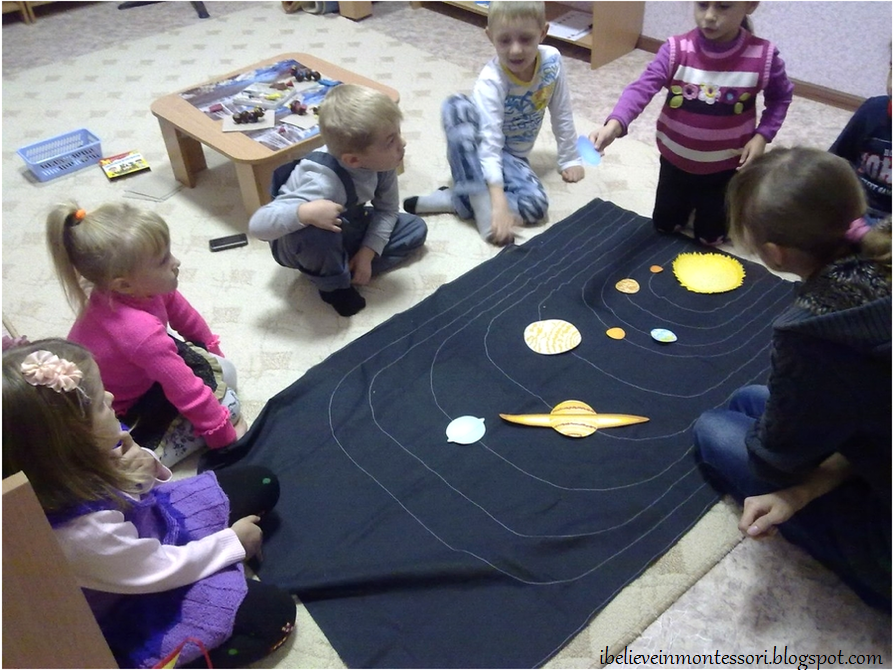 Also, we can label each planet.
I made orbit for Pluto too, I tell kids that earlier people thought that it is a planet and now it is not.
I use planets matching cards from The Helpful Garden. I like their natural look. You can download them HERE. 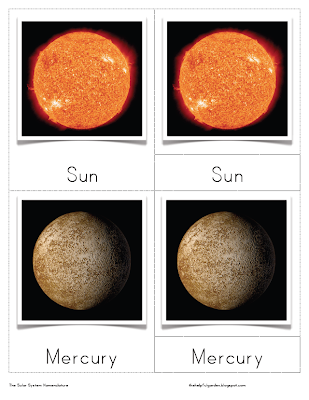 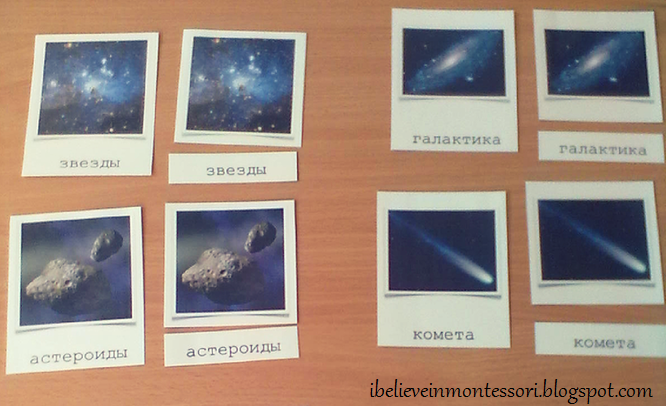 Once having a walk, I found a stone that looks so much alike our asteroid card! You can not see it on the photo but in reality, the holes in the stone look very similar. Now I show it to children and tell them that this stone is very much alike the part of the asteroid. I use it as a copy. It is impossible to find any real objects for this unit so I count my stone as a great finding! 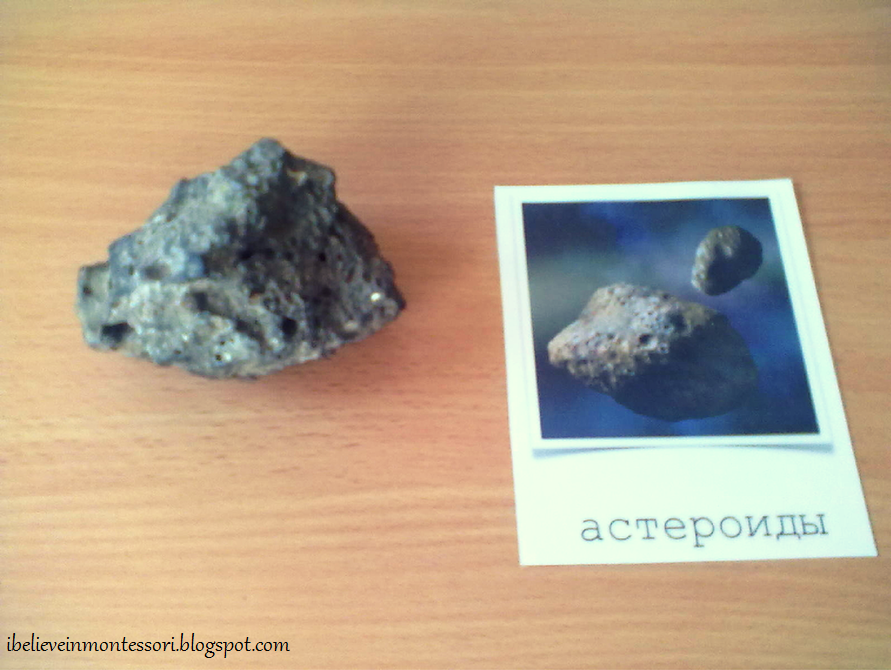 Same planets as used before but cut in part. Good addition to planets learning. 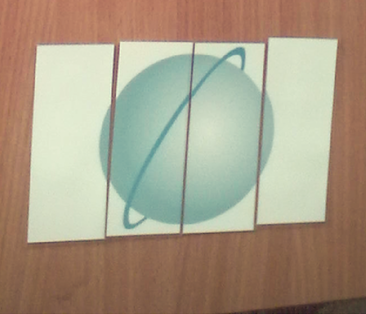 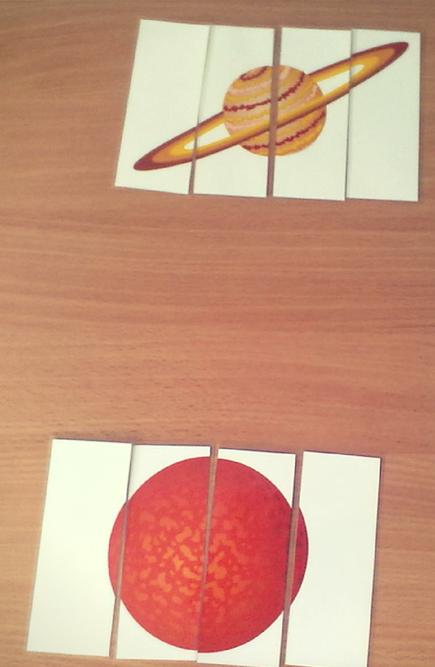 Also same cards but made in the form of domino puzzles with numbers for math area. 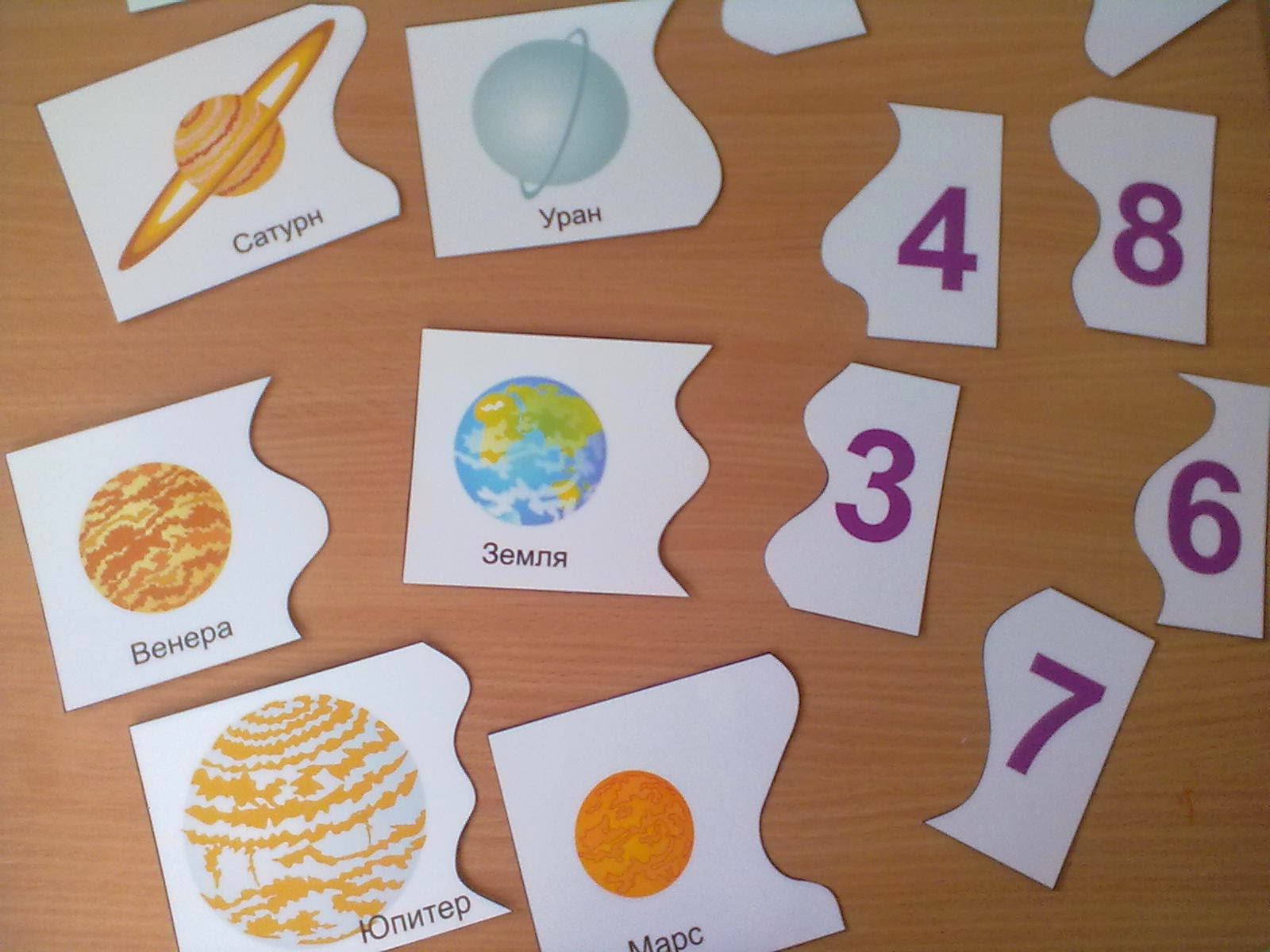 Cards for constellations matching. I downloaded them from Montessori for Everyone site. Children like to imagine the shapes of each constellation and to think why people gave them such names. I like that it is difficult for them to find the same cards, they need to be very attentive. 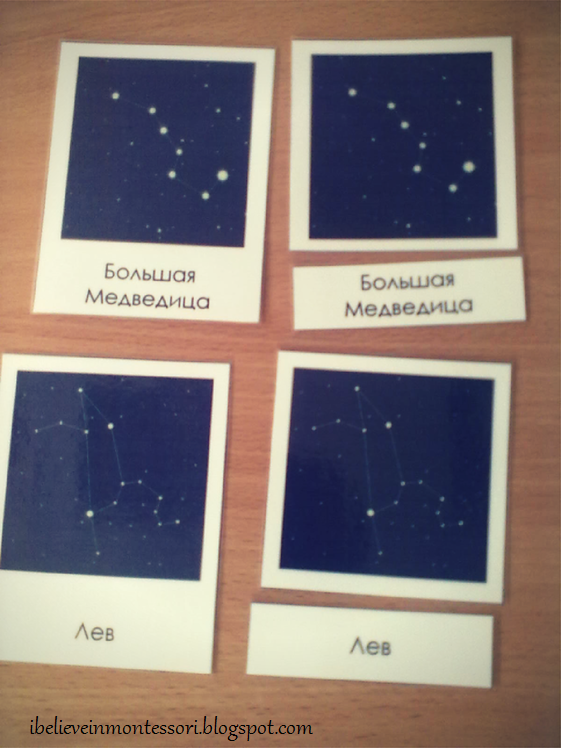 I found some zodiac pictures and use them as zodiac material. I show children card and then retell the story connected with it. Children like these myths very much. 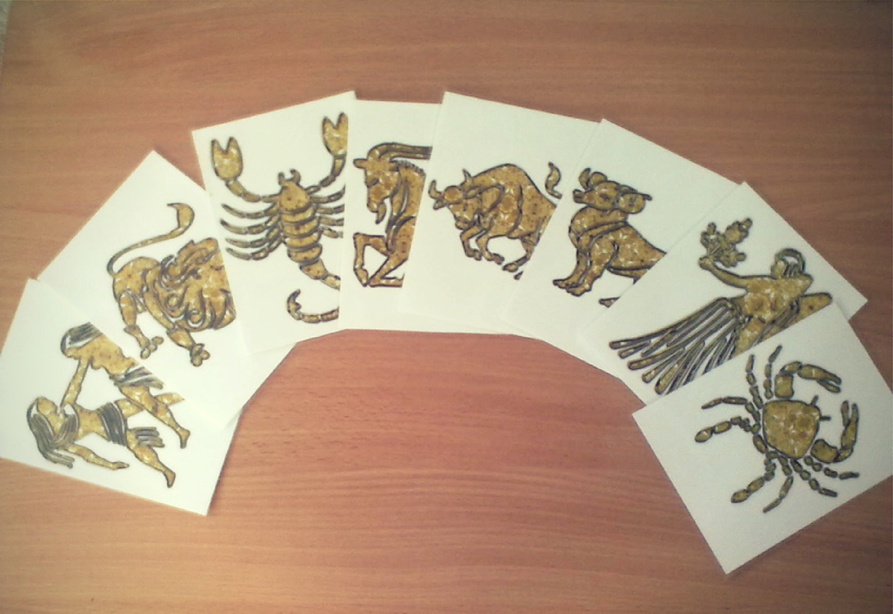 Recently I got an idea for the new printables. And here they are: 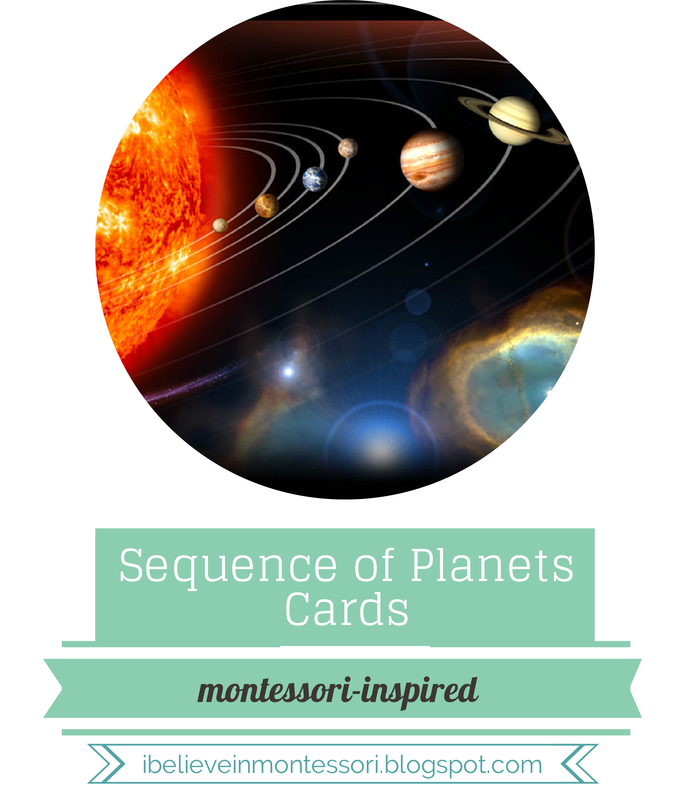 These cards will help children to learn the sequence of planets and to remember better position of each planet. They are made in the manner or parts of whole cards. I thought it would be nice to isolate some parts of a picture to highlight the important thing. Also, I think it can be interesting to spy some planet after mixing the cards. The cards have control of error.

You can buy this material in my shop here: Montessori-inspired Sequence of Planets Cards

I hope you enjoyed this unit as much as I did and found some ideas interesting!

5 thoughts on “Welcome to the Universe Unit + Free Printables”